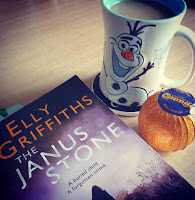 The Janus Stone is #2 in a series about Dr Ruth Galloway (a forensic archaeologist) and DCI Harry Nelson.

The story starts with Ruth visiting her fellow archaeologists on a Roman dig and meeting the resident expert, Dr Max Grey. His team have found bones buried beneath a wall, and we're introduced to the Celtic/Roman tradition of a foundation sacrifice - burying a body beneath a wall or doorway as an offering to Janus or Terminus. Janus is the god of beginnings, gates and doorways; Terminus is the god who protects boundaries and boundary stones.

This thought is uppermost in Ruth's mind when the police call her in to examine the skeleton of a child found by builders demolishing an old house, but surely it's just a coincidence that the body has been buried directly under a doorstep? There was once a children's home on the site, and two of the children went missing forty years ago. Could the skeleton belong to one of them? But why is the skull missing?

The story is cleverly written to include lots of potential suspects for murder, all with very plausible motivations and all with something to hide - including Ruth. How is she going to tell the father of her child that she's pregnant?

I enjoyed the book because I loved the characters, flaws and all, as well as the gentle humour and quirky historical details. I really love the character of Cathbad the druid and his unlikely friendship with DCI Nelson - who doesn't want to like him but just can't seem to help himself. And I love that Ruth is quite capable of saving herself - there is a rather tense chase scene at the end. I also didn't guess the identity of the murderer, which is always a plus for me!

Review: The Crossing Places by Elly Griffiths
Posted by Louise Marley at 10:50