I love Alice Hoffman's books. I discovered her after watching the film Practical Magic (starring Sandra Bullock and Nicole Kidman) and gradually worked my way through her backlist. Since Practical Magic was originally published she has written two prequels: The Rules of Magic (a story about the aunts from Practical Magic) and now Magic Lessons, which explains the origin of the family curse - that any man who ever loves an Owens woman will be broken in body and soul.

The story starts in 1664 when a baby girl is found abandoned in a snowy field close to the cottage of Hannah Owens, a herbalist and healer who has taught herself magic. When Hannah unwraps the baby's blanket she recognises an unusual birthmark shaped like a star - the mark of a bloodline witch. Is this why baby Maria has been abandoned? The story spans a 30 year period, following Maria as she finally meets her disreputable parents, is forced to flee England, becomes an indentured servant in Curacao, makes a living for herself in the fledgling city of New York, before ending up in Salem - and we all know what happened there...

If you do think you know what's going to happen, you're in for a surprise. Alice Hoffman ingeniously re-tells Maria's story as it appears in her earlier book but with some very clever twists. As Maria moves from place to place she makes a note in her grimoire of the plants that are grown locally and the uses they can be put to (both recipes and spells) and these notes are cleverly woven into the story. The amount of historical detail about England in the 17th century, life in the Caribbean and early New York is amazing. I wasn't sure I'd learn anything new about Salem but the author concentrates on the people who lived there and what motivated them to begin accusing their neighbours of witchcraft.

The writing is beautiful, with a dreamy fairy tale quality that pulled me right into the world the author has created. I loved the characters despite their flaws - it turns out that even a witch who can read every 'sign' is capable of walking straight into disaster! I especially loved Samuel and Cadin - both of whom had a lot to put up with! The story is also about women supporting women, mother-daughter relationships, women surviving in a man's world and life's harsh lessons.

Magic Lessons is the perfect story to read as the nights begin drawing in, for anyone who wants to lose themselves in a really good book, who loves historical novels or magic realism, or anything 'witchy'. Fans of Practical Magic will not be disappointed. One of my favourite reads this year.

Thank you to Alice Hoffman and Scribner/Simon & Schuster UK for my copy of this book, which I requested from NetGalley and reviewed voluntarily.

Posted by Louise Marley at 12:13 No comments: 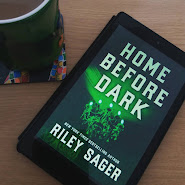 I love Riley Sager's books. He takes a classic horror trope, puts a modern spin on it and then twists it out of all recognition. Home Before Dark is a super-spooky read that mashes up The Amityville Horror and The Haunting of Hill House (the Netflix version), with a dash of The Enfield Haunting, and creates something new and sparkling.

When Maggie Holt was five years old her family moved into Baneberry Hall, a rambling old Victorian mansion that already had a sinister reputation. They lasted all of three weeks before fleeing in the middle of the night, never to return. No one would have known or cared - except Maggie's father then decided to write a book about their ghostly experiences. Now, nearly thirty years later, both Baneberry Hall and Maggie are still notorious.

The story starts as Maggie's father dies and she inherits the house. She's a property developer so she has the idea to move into Baneberry Hall and renovate it to sell. She's not at all worried about the ghosts but because ghosts don't exist - do they?

This is such a fun (and spooky!) read. If you love ghost and haunted house stories, you will absolutely adore this. If' you've read lots of horror you'll recognise the nods to various books. I was on the edge of my seat throughout most of the story, which I read very quickly because I couldn't put it down. It was doubly unfortunate that after the scariest part I was supposed to be putting the light out and going to sleep - as if!

I loved the characters. I loved the setting and the historical background the author created. The clever little twists - the graveyard is one but I can't say any more before of spoilers. I can't say much because of spoilers, actually, so I'll just say that it's a five-star read and I particularly liked the way some of the threads were left loose at the end for you to make your own mind up about what really happened...
Thank you to Riley Sager and Hodder and Stoughton for my copy of this book, which I received via NetGalley and reviewed voluntarily.
Related Posts:
Final Girls by Riley Sager
Lock Every Door by Riley Sager
Posted by Louise Marley at 15:54 No comments:

Review: The Devil and the Dark Water by Stuart Turton

I thought Stuart Turton's previous book, The Seven Deaths of Evelyn Hardcastle (Agatha Christie crossed with Groundhog Day) was brilliant and highly original, and I wondered what on earth he would write next. The answer is something completely different!

The Devil and the Dark Water is a historical mystery with hints of the supernatural. Set in 1634, the action takes place on board the Saardam on a voyage from Batavia to Amsterdam. Among the passengers is Samuel Pipps (a 17th century Sherlock Holmes) who is being transported to his execution. He's accompanied by his loyal bodyboard, Arent Hayes.  As soon as the ship sets sail, things start going wrong. The ghost of a dead leper stalks the decks, strange symbols appear on the sails and carved into the ship's timbers, and livestock is mysteriously slaughtered. Could there be a demon living amongst the ship's passengers and crew? With Samuel imprisoned below deck, all lives depend on Arent solving the mystery...

The Devil and the Dark Water is thoroughly gripping. I was sucked into the story, reading it very quickly, desperate to find out how it ended. The amount of historical detail about life on board the Saardam is incredible - I was living that voyage along with those unfortunate passengers.  And I loved the rather sweet character of Arent, who keeps his honour when all those about him are losing theirs yet still doubts his ability to solve the mystery without the help of his good friend Samuel.

Anyone who enjoys intricately plotted historical mysteries, with complex characters that leap off the page, will love The Devil and the Dark Water. For me, the only thing that stopped it being a five-star read was what happened after the mystery was solved. That's just a personal niggle because otherwise I thoroughly recommend the book - and that cover is gorgeous!

Thank you to Stuart Turton and Raven Books (Bloomsbury) for my copy of this book, which I requested from NetGalley and reviewed voluntarily.

The Seven Deaths of Evelyn Hardcastle by Stuart Turton

Posted by Louise Marley at 20:20 No comments: