I love Elly Griffiths's mystery novels because of their clever twisty plots and warm-hearted characters. The Postscript Murders is the second in the Harbinder Kaur series. The first one, The Stranger Diaries, was a modern gothic mystery. The Postscript Murders is more a nod to classic 'golden age' crime fiction. You don't have to have read the first book in the series to enjoy this one.

Peggy Smith was a 'murder consultant'. She advised crime writers on their plots and invented original ways for them to kill off their characters. When she died at the age of 90 in a retirement home, Detective Sergeant Harbinder Kaur doesn't believe there is anything suspicious about it. Until Peggy's carer is held up at gunpoint - for a book!

Elly Griffiths is brilliant at creating characters that you really care about. I was so pleased when she decided to write another book featuring the dour Harbinder Kaur - now I'm hoping Elly will write another story featuring the stars of this story - Natalka (Peggy's care assistant), Benedict (the ex-monk) and Edwin (Peggy's friend, an ex-BBC producer). They would make a wonderful investigating team!

The Postscript Murders is like a fan letter to classic murder mysteries. Many of the secondary characters are crime writers and you get a glimpse into their lives. I love the way Natalka, Benedict and Edwin hare off to Aberdeen and gate-crash a writers' conference, determined to speak to Peggy's old clients and solve her murder. There is lots of bookish talk and even book bloggers get a mention. It's terrific fun!

The Postscript Murders is one of my favourite reads this year - such a gorgeous cover too! Recommended for all fans of traditional murder mysteries and readers of authors such as Richard Osman (The Thursday Murder Club) and Kate Ellis (the Wesley Peterson series). I'm counting the days until the next one - fingers crossed!

Thank you to Elly Griffiths and Quercus for my copy of this book, which I requested from NetGalley and reviewed voluntarily.

Posted by Louise Marley at 14:28 No comments:

I love Naomi Novik's folklore-inspired fantasy novels. One of my all-time favourite books is Spinning Silver, which is a re-imagining of Rumpelstiltskin so I was thrilled to get my hands on an early copy of A Deadly Education. It wasn't quite what I was expecting but I really enjoyed it. Imagine a kind of Harry Potter where everything is out to get you, not just the bad guy!
El (short for Galadriel) has been born into a magical family and is now studying at the Scholomance - a school for magic that (unlike Hogwarts) seems to actively want to kill its students. All El wants to do is learn magic and survive the first year - without the help of popular rich boy Orion. Oh yes, and there's a prophecy that says one day El will bring death and destruction to all the magical enclaves in the world...
Naomi Novik has created an amazing, original and incredibly detailed world. Sometimes it's best to just go with the flow rather than try to understand everything. The story is fast-paced (with near-death experiences in practically every chapter) and completely thrilling. I truly had no idea what was going to happen next. Part of the fun is to see El slowly forced to make friends - she is so used to people assuming she's into dark magic, she has always kept her distance from everyone and prefers to work out things on her own. Her relationship with Orion (who is determined to save everyone, whether they want it or not) is also sweet and funny.
A Deadly Education is a school-of-magic story with a slightly darker edge that Naomi Novik's regular readers will love. It should also appeal to fans of authors such as Soman Chainani (The School for Good and Evil). I loved El and Orion, and was completely swept away by the novel's originality and exuberance. I can't wait for the next one!
Thank you to Naomi Novik and Del Ray/Cornerstone for my copy of this book, which I requested via NetGalley and reviewed voluntarily.
A Deadly Education will be released on 29th September 2020
Posted by Louise Marley at 12:15 No comments: 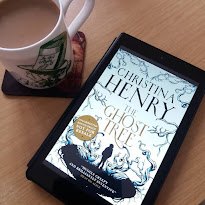 I'm a huge fan of Christina Henry's re-imagining of classic fairy tales, so I couldn't wait to get my hands on The Ghost Tree - and the cover is gorgeous. Although the story is in a completely different style to her previous books, I really did enjoy it.
It's 1985 and fifteen-year-old Lauren's life hasn't been the same since her father was found brutally murdered. Strangely, no one wants to talk about his death or how it happened. Lauren's best friend Miranda has become more interested in clothes, make-up and boys, and no longer wants to hang out with Lauren at the old ghost tree. But when the remains of two teenage girls are found and Lauren has a vision of a monster dragging them through the woods, she knows that she will have to be the one to do something no matter what anyone else believes.
The Ghost Tree is told from multiple viewpoints. This works really well, plunging you into the story right away. As well as Lauren, still grieving for her father, there is Karen (Lauren's mother) trying to cope with two children, both of whom seem to have have unsettling 'visions'. There is also the Lopez family, recently moved to town, who have to deal with their neighbour's blatant racism and the realisation that there's something not quite 'right' about Smith's Hollow.
I loved the 80s vibe and the Scooby-Doo-ish kids-fighting-supernatural evil. The gothic horror was a little dark in places for a YA novel (although I think this is supposed to be aimed at adults?) but there is lots of coming-of-age stuff and the trials of being a teenager. It's basically a fab Sleepy Hollow/Stranger Things/IT mash-up and Lauren's grandmother (who lives in a big old house on a hill, naturally) telling fabulous far-fetched stories about witches and curses, was the icing on the cake. I do hope there is a sequel!
If you like spooky, supernatural horror then this is the book for you - although I do feel it's more suited to a YA audience. A solid five stars from me.
Thank you to Christina Henry and Titan Books for my copy of this book, which I requested through NetGalley and reviewed voluntarily.
Posted by Louise Marley at 11:17 No comments:

Review: We Are All the Same in the Dark by Julia Heaberlin

I downloaded this book because I couldn't resist the gorgeous cover and Julia Heaberlin is one of my favourite authors.
Ten years ago the town's sweetheart Trumanell Branson disappeared, leaving only a bloody hand-print behind. The townsfolk always believed her brother Wyatt had something to do with it and he's now become a recluse. Odette was once Wyatt's best friend and even she isn't entirely sure of his innocence. So when she discovers that he has a young girl at his house, that he says he 'found' at the side of the road, it's hard for Odette not to assume the worst.
The story is told from three points of view: Wyatt's, when he finds a young girl lying asleep in a field surrounded by a ring of dandelions; Odette's, as she tries to discover the girl's identity but finds herself becoming obsessed with the murder of Trumanell instead; and the teenage Angie, who arrives in the small Texas town determined to discover the truth behind the mystery.
I love Julia Heaberlin's novels because they never go in quite the way you think. We Are All the Same in the Dark has a huge twist in the middle (which I hated) but it does give the story a unique edge. It's not a fast-paced thriller, more of a slow-burn mystery, with each clue revealed in a careful 'blink and you'll miss it' kind of way. The author takes the time to build up a deliciously creepy atmosphere, until you're convinced every character is the murderer! Halfway through I was so worried I admit I took a peek at the end. (Don't do this!!!) I'm not sure if I would have guessed the outcome if I hadn't known it in advance.
We Are All the Same in the Dark has an almost gothic feel with some super-scary scenes (the very claustrophobic stuck-in-a-barn-during-a-tornado scene), particularly towards the nail-biting finish. As with the author's earlier novels, I loved the quirky characters, especially Wyatt and Odette. I even warmed towards Rusty towards the end.
I'd recommend We Are All the Same in the Dark to anyone who loves slow-burn psychological suspense populated with eccentric characters. I can also see it appealing to fans of Lisa Jewell and Ruth Ware. This was a five-star read for me.
Thank you to Julia Heaberlin and Michael Joseph (Penguin UK) for my copy of this book, which I requested from NetGalley and reviewed voluntarily.
Related posts:
Paper Ghosts by Julia Heaberlin
Posted by Louise Marley at 16:18 No comments: