Review: The Spinster and the Rake by Anne Stuart

Anne Stuart is one of my all-time favourite authors. I think the first book of hers I read was one from her House of Rohan series when I bought my Kindle. Over the years I've read most of her books - not as easy as it sounds, because she has been writing for over 40 years (mainly romantic suspense and historical romance) and some books are out of print. The Spinster and the Rake is one of her older books, originally published in 1982 and now brought out as an ebook, revised and with new material.

The Spinster and the Rake is a familiar trope to readers of romance: bad boy meets innocent heroine, but as usual Anne Stuart puts her own twist on it.

Gillian Redfern divides her time between the households of her two sisters and domineering elder brother, running errands for them, helping with their children and generally behaving as an unpaid servant. She does have her own money, thanks to legacies from her mother and an aunt, but has sleepwalked into her current lifestyle without realising it. It takes a chance meeting with the wicked Marquis of Marlowe for her to understand what she has been missing.

I enjoyed the banter between the characters and their growing respect for each other. I liked the way Gillian was not some downtrodden Cinderella character but quite capable of standing up to her bullying elder brother. The minor characters were well-drawn too - Gillian's nephew, who has incurred gambling debts, and her niece, who is determined to marry an impoverished Vicar. Not to mention her sister-in-law, who hardly moves from the sofa, no matter what disaster threatens the family!

If you enjoy this book then you will love The Devil's Waltz, which has a similar plot and is one of my all-time favourite books. If romantic suspense is more your thing, then I'd recommend Anne Stuart's Ice series.

Thank you to Anne Stuart, Bell Bridge Books and NetGalley for my copy of this book in exchange for an  honest review.
Posted by Louise Marley at 10:00 No comments: 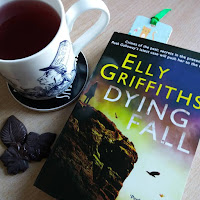 This is the fifth book in Elly Griffiths's 'Ruth Galloway' series about a forensic archaeologist. It can be read as a stand-alone but you do get more out of the series if you read them in order (which I didn't!); you learn more about the characters and their lives.

One of Ruth's old university friends, Dan Golding, has just died in a house fire. In a horrible coincidence she receives a letter from him detailing his latest, controversial find - the grave of a mythological king. Could this find have been controversial enough to get him murdered? He certainly admits to feeling afraid.

By coincidence Ruth has also been approached by Dan's old university, who want her to confirm the bones are as significant as Dan thought they were. But when Ruth arrives in Lancashire she realises there's something not quite right about the bones - they're not all from the same body for a start.

Dying Fall is now one of my favourite Elly Griffiths books. I loved the story behind Dan's find (no spoilers!) and the revelation that would cause history to be re-written. The Pendle witches are also mentioned and there's a hint of the supernatural when Ruth's friend Cathbad spends the night in what might be a haunted cottage.

I completely fell for the red herrings and failed to guess the identity of the murderer, and there's a nail-biting finish at a funfair, where one of the characters really does suffer a dying fall ...

Note: I have read the book preceding this, A Room Full of Bones. I enjoyed it and would recommend it but, as I read it some time ago, I would have had to read it again to write a review.
Posted by Louise Marley at 09:00 No comments:

Review: A Pirate for Christmas by Anna Campbell

Bess Farrar's father is the Vicar of Penton Wyck but he's more interested in his books than looking after his parishioners, so it's up to Bess to do the jobs that would normally fall to a Vicar's wife - including organising the annual Nativity play. Everything is going splendidly, except the donkey is traditionally supplied by the Earl of Channing and, although Bess has written politely to the new incumbent several times, she hasn't had a reply to any of her letters. Drastic measures are called for and she decides to call on the Earl in person, even though the rumour going around the village is that he's a pirate ...

Ex-Royal Navy Captain Rory Beaton finds himself thrown in at the deep end when he unexpectedly inherits an earldom from the brother he hardly knew. Rory was raised as 'the spare' by his mother in Scotland and doesn't have a clue about what is expected from him as the new Earl. As no one in the village has seen him, let alone met him, rumours abound that he's a pirate - and the locals aren't far off 'locking up their daughters and calling in the militia'. And, if he didn't have enough to worry about, the resident battleaxe is hounding him about a donkey ...

A Pirate for Christmas is an entertaining and engaging Regency romance. Although I was a little disappointed there were no actual pirates, I would definitely recommend it to fans of the genre. I loved Bess and Rory and the way they sparked off each other. There is humour too, particularly involving Daisy the donkey - who eats everything from bonnets to floral arrangements, and likes to be sung to. The story is also very Christmassy, with descriptions of decorating a manor house for the festive season, getting stuck in a snowstorm, as well as the aforementioned nativity play. All the ingredients for a great little festive romance. I really enjoyed it and I downloaded two more by the same author after reading it.

Note: A Pirate for Christmas is a 142 page novella; the last 15% contains an extract of another novella by the same author: Her Christmas Earl.

Posted by Louise Marley at 20:27 No comments: