I love stories about ghosts and witches, and things that go bump in the night. I especially love frightening myself half-to-death reading them in the weeks leading up to Halloween! My favourites are ghostly, historical gothics, such as The Silent Companions by Laura Purcell and This House is Haunted by John Boyne, but this year I did step out of my comfort zone with Dark Matter, a brilliant twist on the haunted house story, set in the Arctic circle.

I've rated all these books five star 'Halloween Reads' but they are not all ghost stories. The Witchfinder's Sister is based on real events. The Yellow Wallpaper is a little gem of a psychological suspense (and currently free on Kindle). The humour of Mystery at Maplemead Castle will have you in stitches.

But whatever you love to read, I'm sure there's something for everyone! 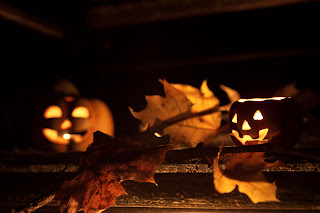 The Silent Companions by Laura Purcell

Elsie Bainbridge, newly married, newly widowed, arrives at her husband's crumbling ancestral home to wait for her baby to be born, with only the company of a few resentful servants and her husband's widowed cousin, Sarah. When Elsie and Sarah explore the house they find two wooden props, skillfully painted to look like children, hidden away in a locked garret: a girl and a gypsy boy - and the girl looks just like Elsie.

A Head Full of Ghosts by Paul Tremblay

Despite the age gap between Merry and her older sister Marjorie, they have a close, loving relationship - until Marjorie starts to behave strangely. Is she having a psychotic breakdown, or has she been possessed by a demon? Or is she just faking the whole thing? When the medical profession are unable to help, her parents call in the local catholic priest. It's then that events spiral out of control and the family find themselves starring in a TV reality show called The Possession.

This House is Haunted by John Boyne

It's 1867 and Eliza Caine has just taken the post of governess at Gaudlin Hall - the previous governess is so keen to hightail it out of there, she passes Eliza at the train station on her way back to London. The house is huge, gothic, and very creepy. It appears to run without any servants and there is no sign of any other adult - just two very strange young children. What happened to the five governesses before her? And why does she get the impression that someone really, really doesn't want her there?

Dark Matter is a ghost story with a difference. Instead of the traditional haunted house, it takes place on the Norwegian island of Spitsbergen in the middle of an Arctic winter - four months of complete darkness. Five men set out on an expedition, one-by-one they all fall by the wayside until only one is left completely alone in the snowy wilderness. Or is he?

The Witchfinder's Sister by Beth Underdown

Newly widowed, Alice returns to Essex to live with her brother, Matthew Hopkins. One of the servants tells her he has a great book that has the names of all the witches written down in it. Yet this is the 17th century - who believes in witches?
But in the town there is talk. Young children have died and people are saying it was done with witchcraft. Intimidated by her brother, Alice remains quiet, believing the women will be found innocent. Instead, more women are seized and imprisoned, and now Matthew wants Alice to help him.

The narrator has recently moved to a large, decaying house with her husband to recover from 'temporary nervous depression'. Her husband, who is also her doctor, has refused to let her work (write), so she has nothing to occupy her mind other than to lounge about their bedroom and obsess about the wallpaper. She feels that,

"There is something strange about the house - I can feel it. I even said so to John one moonlight evening, but he said what I felt was a draught, and shut the window."

The Lost Village by Neil Spring

In 1932 famous ghost hunter Harry Price and his assistant, Sarah, travel to an uninhabited village on Salisbury Plain, currently being used as a training ground by the British Army, to investigate exactly what it is that has got the soldiers so spooked.

At the grand old age of 27, Melody 'I see dead people' Bittersweet has decided to stop fighting the unique talent which is persistently getting her fired/losing her potential boyfriends, and has set up The Girls' Ghostbusting Agency. Along for the ride are best friend Marina, the terrifyingly efficient Glenda, and naive young Artie, who has just enough sense to dig the girls out of trouble if they need it. In this story, Melody and her friends investigate Maplemead Castle and find it haunted by circus folk - two trapeze artists and their ringmaster - doomed to repeat the events that led to their deaths every single night.

Psychic Manfred Bernardo has just moved to to the town of Midnight in Texas, which is basically just a few run-down stores around an intersection with one set of traffic lights. His new neighbours seem friendly enough, if a little ... strange ... but he's sure he's going to fit in just fine. He's right about that, because while Manfred has a few secrets in his past, it's nothing compared to those of his new friends.

Halloween Reads 2016
10 Books Which Chilled Me (on my personal blog)
Posted by Louise Marley at 16:47