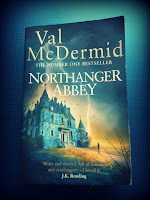 Cat Morland is the daughter of a vicar, and slightly naive due to being home-schooled, who longs for the kind of excitement and adventure she reads about in her favourite books (the very Gothic Hebridean Harpies series). When her wealthy neighbours offer to take her to the Edinburgh Festival for a month, she is thrilled.

I've not read the original Jane Austen version of this story, so I'm unsure how closely this re-imagining follows the original. Much of the first half of the book is taken up by Cat going to various Festival events and meeting the rather awful Thorpe family. Bella, who swiftly becomes her new best friend, mainly for their shared love of the Hebridean Harpies, and the bombastic Johnny, who decides Cat is going to be his new girlfriend, regardless of what she thinks. In extreme contrast, are the gentle, kind-hearted Tilney's - Henry, who teaches Cat to dance, his mysterious sister, Eleanor, and their 'mad, bad and dangerous to know' elder brother Freddy, on leave from the army, who delights in causing trouble.

The second half the story is where Cat is invited by Eleanor to stay at the family house - or rather, baronial castle. Expecting a deliciously gothic mansion, like the settings for one of her favourite books, Cat is rather disappointed to find the interior has been completely modernised. Still, there are lots of mysterious goings on to compensate ...

I loved the leisurely pace of this novel, so different from Val's crime novels. I particularly enjoyed all the descriptions of Edinburgh and the famous Festival, which really made it come alive for me. I also have a weakness for the same kind of gothic novels as Cat, so I appreciated the humour, and the developing romance between Cat and Henry was sweet.

Recommended if you'd like to read a clever, funny and inventive re-working of the classic Jane Austen novel, but if you're expecting something more like Val's crime novels, you might be disappointed.

Val McDermid comes from Kirkcaldy, Fife, and read English at St Hilda’s College, Oxford (where she is now an Honorary Fellow). She was the first ever student from a state school in Scotland. Following graduation she became a journalist, and worked briefly as a dramatist.

Her first success as a novelist came with Report for Murder the first Lindsay Gordon Mystery, first published in 1987.

Among her many awards are the Portico Prize for Fiction, the LA Times Book Prize, the Lambda Literary Pioneer Award and the Cartier Diamond Dagger. She has published 27 novels, short stories, non-fiction and a prize-winning children’s book. She is a regular broadcaster for BBC radio and lives in Edinburgh.