Review: The Death of Mrs Westaway by Ruth Ware 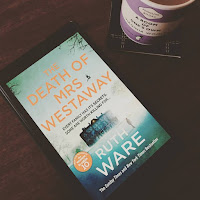 When I spotted the cover of The Death of Mrs Westaway I knew I would enjoy it. I LOVE gothicky mysteries with spooky old houses and old family secrets!

The story starts with Hal (Harriet), who is struggling to make a living following the death of her mother three years previously. Hal had to give up her dreams of going to university and instead took over her mother's job of tarot reader on Brighton Pier. Falling behind on payments to the local loan shark, it seems like a dream come true when a solicitor's letter arrives to tell her that her grandmother has died and left her a bequest. Except Hal's grandmother died before she was born, didn't she?

Ruth Ware takes familiar tropes and motifs from the traditional/old school gothic mystery and puts her own original spin on it. There is a nod towards Rebecca, with the creepy Mrs Danvers-like housekeeper, but all references are done with an affection for the genre.

Hal makes a very likeable, if unusual heroine, who has suffered several setbacks in life. I loved the way she kept telling herself that she was a tenacious rat, not a little mouse, whenever she felt herself falter! Linking in Hal's job as a tarot reader, and the way she reads the cards to help her think through problems was inspired and I was became so engrossed in the story I completely forgot to try and work out who the murderer was.

The title makes the story sound like an Agatha Christie but it's a traditional gothic mystery. Exactly who was murdered and why isn't revealed until after a superb build-up of tension. There is a thread of historical (1994!) backstory running through the plot, giving an insight into the characters' past, but it doesn't dominate the novel.

The Death of Mrs Westaway should appeal to fans of Daphne du Maurier, Eve Chase, and possibly Mary Stewart, although there is no romance.

In conclusion, The Death of Mrs Westaway is one of my favourite reads this year. I absolutely loved it. More please!


Thank you to Ruth Ware and Vintage Digital/Harvill Secker for my copy of this book, which I requested from NetGalley and voluntarily reviewed.

In a Dark Dark Wood by Ruth Ware
Posted by Louise Marley at 20:48