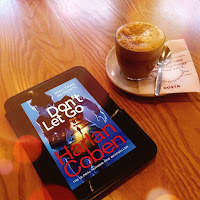 I'm a huge fan of Harlan Coben, so I couldn't wait to get my hands on this one - and I read it in two days flat! I absolutely loved it!

Fifteen years ago, Nap's twin brother Leo, and Leo's girlfriend Diana, were found dead on the train tracks in a small town in New Jersey. Their deaths were put down to accident or suicide, and everyone moved on. Everyone except Nap, who is obsessed with finding out what really happened that night and if his brother's death is linked to the disappearance of his own girlfriend, Maura. Now another of Leo's old school friends has been killed, and Maura's prints have been found at the scene. Are the deaths connected, and what is the link to that mysterious old missile base hidden in the woods?

Don't Let Go is a fast paced-thriller and one of my favourite Harlan Coben novels to date. I loved the link between an old mystery and one in the present-day, and the way all the characters have secrets of their own. There is a theme running through the novel, very cleverly done, that I can't reveal because of spoilers, along with lots of false trails and red herrings, several of which I utterly fell for, and some great twists. The missile base is a real place, which I thought was a nice touch, and I found the way the story is told as though Nap is talking to his brother was endearing.

I would recommend this book to anyone who loves fiendishly clever mysteries and fast-paced thrillers. Harlan Coben's existing fans will love it. I certainly did!


Thank you to Harlan Coben, Cornerstone/Random House and Netgalley for my copy of this book, which I received in exchange for an honest review.
Posted by Louise Marley at 16:12