Review: Then She Was Gone by Lisa Jewell 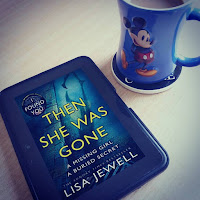 Then She Was Gone is a clever psychological suspense about a mother who has never given up hope of finding her missing daughter.

Ellie Mack disappeared ten years ago and the rest of her family, particularly her mother Laurel, have never recovered from the shock. Laurel's marriage crumbled and her relationship with her other children deteriorated until it was non-existent. Now Laurel finally has the strength to move on. She meets a handsome, funny, clever man and begins to fall in love. And then meets his young daughter, Poppy, who is the spitting image of Ellie ...

I usually avoid books about missing children, but the premise of this one intrigued me. As I read the story I thought I had the end all worked out - and I did, to a point. There were some twists that surprised even me. I got about a third of the way through the book, thought I'd just read another chapter before bedtime - and didn't put it down until I'd finished the story at 1.00 am. And then lay awake for another hour thinking about it! It really is that gripping.

I can't say much more because I don't want to spoil it for you. I can't even say it's like a cross between 'x' and 'y', because then you'll work out where the author is going with the story and it will be more fun for you going in without a clue. So I'll just say that if you love well-written psychological suspense you are in for a treat! Recommended!

Thank you to Lisa Jewell, Cornerstone Digital and Netgalley for my copy of this book, which I received in exchange for an honest review.
Posted by Louise Marley at 15:12