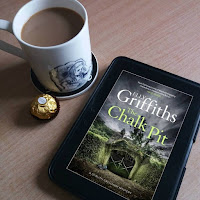 I discovered the Ruth Galloway series over Christmas, read them all back-to-back, and was then thrilled to get my hands on an advance copy of The Chalk Pit, which is Elly Griffiths's latest one. You don't need to have read the other books to make sense of the story but I recommend that you do. Elly Griffiths has created such wonderful characters that they feel like old friends and I love seeing how they develop from book to book. Regular readers will 'get' the joke of DCI Harry Nelson being sent on a speed awareness course at the start of the story and that he now has a female boss who thinks he's a dinosaur. She may have a point but that's part of his charm!

The story starts with Dr Ruth Galloway, a forensic archaeologist, investigating a collection of bones that have been found in a tunnel beneath Norwich Guildhall during renovations to turn an undercroft into an underground restaurant. The bones are shiny, like 'glass', and have strange cut marks on them. Even if you don't read a lot of crime fiction, you'll probably realise the sinister implication.

Meanwhile, Nelson has been approached by a homeless man he knows only as 'Aftershave Eddie', who is worried about a female friend of his (also homeless) who has gone missing. Shortly after, Eddie is found dead on the steps of the police station where Nelson works - and not from natural causes.

The Chalk Pit is a more serious book than its predecessors, dealing with the plight of the homeless and how others view them. When another woman goes missing, this time a middle-class mother of four, the contrast is made between the amount of time and police manpower spent searching for her to that of Eddie's homeless friend.

I've always been a sucker for stories with secret tunnels (I blame Enid Blyton) and I loved the historical background of the chalk mines and labyrinth of tunnels beneath Norwich. My only niggle was that I'd have liked to have had more archaeology and less police procedure, more of Ruth and Cathbad, and less of Judy - who I do like, just not as much as Ruth, Cathbad and Nelson!

Right at the end of the story there are a couple of revelations about major characters that made my jaw drop. I cannot wait until the next book in the series!

Recommended - particularly if you like a slice of history with your murder mysteries.


Thank you to Elly Griffiths, Quercus and NetGalley for my copy of this book, which I received in exchange for an honest review.