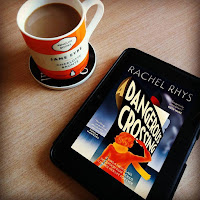 I'm a sucker for a pretty cover, and it was the cover of this book that made me download it, as I had never heard of the author*. From the vintage look and the blurb, I got it into my head the story was going to be a glamorous 'golden age' murder mystery set on board a ship. A kind of Agatha Christie meets Downton Abbey. In fact, the story is a very clever psychological suspense - one of those stories that slowly draws you in and builds up the tension until you can practically feel it closing in on you.

The story is about Lily Shepherd, who is travelling from England to Australia on the Orontes as part of the Government's assisted-passage scheme. Once she arrives, she will apply to work as a maid in one of the large houses in Sydney. It is 1939, and Britain is on the brink of war. Why would Lily want to leave her family, whom she loves very much, and travel to the other side of the world to work in domestic service - something she has sworn she would never do again?

Lily will be sharing her cabin with Audrey and Ida, two former chambermaids from Claridge's Hotel. While Audrey is friendly, Lily takes an instinctive dislike to Ida, who can't seem to say anything nice. At dinner, Lily finds herself seated on the same table as Edward and Helena Fletcher, a brother and sister who appear to have fallen on hard times. Lily is increasingly attracted to the good-looking Edward, but he seems to be obsessed with glamorous socialite Eliza Campbell. Eliza, meanwhile, takes Lily under her wing, paying for her excursions and lending her designer clothes - but are her motives entirely altruistic?

I loved the incredibly detailed descriptions of life on board the Orontes, and the places Lily visited, from the pyramids of Egypt to a Buddhist temple in Ceylon. I felt as though I'd travelled back in time and was taking the cruise along with Lily. The cast of characters, who all seemed to be running away from something, were fascinating. The author allows the reader to get to know character in turn, letting us discover their real personalities one flaw at a time. Which character's behaviour will result in their murder? Which character will be goaded into carrying out that murder?

A Dangerous Crossing is an absorbing and compelling read about an eclectic cast of characters forced into claustrophobic proximity with people they would normally cross the street to avoid. I loved it! Also, what a brilliant title!

If you love reading historicals with a bit of a mystery, or tightly-wound psychological suspense, you will love this book. If you're a fan of fast-paced murder mysteries then this might not suit, as the first murder does not take place until a good three quarters of the way through the book.


*Rachel Rhys is the pen name of Tammy Cohen/Tamar Cohen

Thank you to Rachel Rhys, Doubleday and Netgalley for my copy of this book, which I received in exchange for an honest review.

Dying For Christmas by Tammy Cohen
Posted by Louise Marley at 19:56