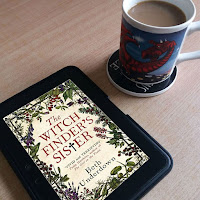 The Witchfinder's Sister is set in the mid-1600s and opens with Alice returning to Essex to live with her brother, Matthew Hopkins. Her husband is dead and she is pregnant and destitute. Alice and Matthew were very close as children but they parted on bad terms when she married the son of their old servant, Bridget - the woman Matthew blames for the accident that left him scarred.

Alice is uneasy to realise that not only is their childhood bond is no more, Matthew intimidates her. One of the servants tells her he has a great book that has the names of all the witches written down in it. Yet this is the 17th century - who believes in witches?

But in the town there is talk. Young children have died and people are saying it was done with witchcraft. Alice assumes the gossip will come to nothing. The women arrested are obvious choices - elderly, eccentric, living alone. Despite Bridget's pleas for her to speak to Matthew, to do something, Alice remains quiet, believing the women will be found innocent. Instead, more women are seized and Matthew turns his attention to other towns and villages - and now he wants Alice to help him.

The Witchfinder's Sister is one of the best books I've read this year. It is beautifully written with so much historical detail I felt as though I was there, witnessing it all. The atmosphere is dark and brooding, with the occasional hint of the supernatural. The subject matter is bleak; it is based on real events, so anyone familiar with history will know there can be no happy ending for some of these women. However, the author has mixed fictional characters in with the real ones to keep the reader on edge, and there are a few very clever twists - including one I'm still thinking about!

From our 21st century perspective, it is easy to laugh at those who believed in spells, charms and witchcraft. But then you realise how easily a petty squabble can be blown up out of proportion, how easy it is to blame someone else for your misfortune - and suddenly The Witchfinder's Sister seems horribly topical.

There is not much actual violence in the novel, the subject matter is disturbing enough, but it is bleak in places. Anyone who enjoys well-researched historical novels, or real-life stories of witches, will love this. The cover is absolutely beautiful and the final line is brilliant. I'm hoping there's going to be a sequel!

I definitely recommend it - I'd give it six stars if I could.


Thank you to Beth Underdown, Viking (Penguin Random House) and NetGalley for my copy of this book, which I received in exchange for an honest review.